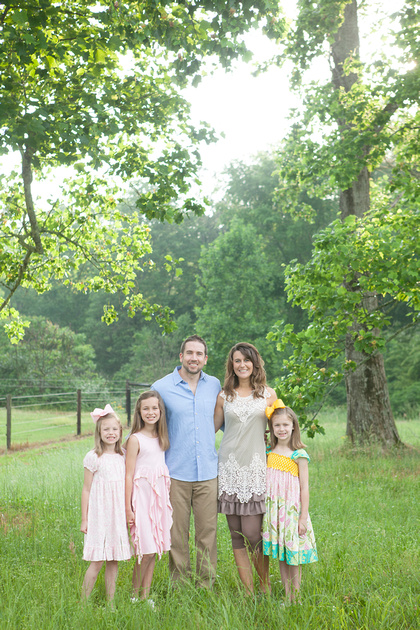 God has a way of making something absolutely beautiful out of the complete messes we make in our lives.  Each day is full of decisions that have to be made that have an affect on the next decision.  One poor decision leads to another, and pretty soon, you’ve dug yourself a hole where there is no way you can climb out on your own.  Sound pretty familiar?  We’ve all reached the point where we are at the end of our rope and don’t know which way to go.  The plans and decisions we make for our life crumble right before our eyes, and we can’t find any peace in understanding.  Soon enough, you realize this life you’re trying to build on your own was built on nothing more than sinking sand.  As the winds fell, and the floods came, and the wind blew, you see it falling apart right before your eyes.  And, so was the case for my life.

I always had a great plan for my life and never considered God or His plans.  Because of this, poor decision after poor decision, I married a girl out of college.  We live in a society where everyone wants the American dream: a college education, a wife, a house, 2.4 kids, and a great job.  And, in my case, this is what I was doing, living the dream.  But, the dream soon ended, and we were divorced less than two years later, much to my accord.  As a man, the last thing you ever want to do is fail at something, and I had a failed marriage.  This was the lowest point in my life.  And, what is sad is at this point in my life, I failed to see the sanctity of marriage with God.  I regrettably admit, at the time, I merely saw this as a failed relationship.

After my divorce, I started dating again and hit it off with another woman.  We had a good relationship as long as we didn’t talk about anything difficult.  We would attend church on Sundays and live like hell the rest of the week.  And, after a couple of years, we got engaged.  It looked like I had found the person I was going to spend my life with.  Little did I know, the engagement would be ultimate test of this relationship.

In the midst of this, God started working in my life, and I ended up making the most important decision of my life, to follow Christ.  What I didn’t realize was in doing this, He would ask me to sacrifice my engagement, which ended 20 days before the wedding.  Once again, another failed relationship and the plans I had laid out were crumbling right before my eyes.  Where the divorce was the lowest point in my life,  this was no doubt the toughest period of my life.  In the trial and tribulation of this time, I was left with two choices: continue to do what I’d always done and expect different results or lean not on my own understanding and trust Christ in all my ways.  For the first time in my life, I chose Christ.  All He asked was to trust Him!

A few months later, I decided to attend a Uganda missions meeting one evening at church.  I never thought about a going on a mission trip, but as it turns out God had other plans.  From the moment of leaving that meeting, Uganda was stirring in my heart, and for every excuse why I couldn’t go, God showed me why I could.  After exhausting every excuse over the following weeks, it purely came down to an act of obedience in following God, and I decided to go on that trip.  What I didn’t realize at the time was this was all part of a greater plan He had set in place.  My life would never be the same.

Upon returning from Uganda, I realized even though this was my first trip, it definitely wouldn’t be the last. God had broken my heart, humbled my spirit, and showed me His greatness.  This trip lit a fire and a passion in me for God and to serve others like I’ve never experienced before.  I also realized that I would have never experienced the blessings from this trip if I had decided not to once again follow God in obedience.  But the trip was only part of His plan.  The best was yet to come….

When we got back from Uganda,  I knew there was another local church going to the same place in Uganda where we had been.  One of those going was Kim Tucker.  Kim and I went to the same high school and literally grew up six miles from each other.  Yet, even in the small community of Corner, we had heard of one another, but never knew each other. That is until our paths crossed one day on Facebook talking about my experience and her upcoming trip to Uganda.  This common thread developed a friendship, and we grew close quickly.  After she returned from Uganda, we stayed in touch and talked about her trip, but didn’t think about dating. But, God had other plans.  And, a couple of months later, we went on our first date.

Ten months later, I’m happy to report that it has been nothing less than incredible.  Kim and I often say the only way we will ever make this relationship work is if we place each other second and keep God as the first love in our lives.  We have lived each day thanking God for the time we have had, praying he will bless us with more, and trusting wherever He leads us, even if that is in opposite directions.  As we have continued to place Christ at the forefront of our relationship, the closer we have grown together.

So now, we have come to this day.  After months of prayer and growing together, the Lord has confirmed to each of us His plan for us to spend our lives together.  And today, I have formally asked Kim to be my wife.  Not only have I asked Kim, but I have also asked her girls, so they know I’m making this commitment to them as well.

To the world, marrying a woman with three kids makes absolutely no sense.  But to God, this is a great example of the gospel in its purest form, and I am honored to have the awesome responsibility of leading all four of these women as we begin a family together.

As I said above, it’s amazing how God can make something beautiful out of a complete mess.  My life is a perfect example of this.  Through faith and obedience in Him in all of my ways, He has made His way available to me in my life.  I often wonder what would have happened if I didn’t obey Him in going to Uganda last year….  I may have never fully seen God’s greatness through His people, may have never reached where I am in my relationship with Him, and I may have never met Kim.

Ephesians 2 says, “You were once dead in the trespass and sins in which you once walked, following the course of this world…. BUT GOD being rich in mercy, because of the great love with which he loved us, even when we were dead in our trespass, made us alive together with Christ….”

Thinking of my own life, I had made great plans for my life, but God’s were better.  And, when I decided to stop trying to do life myself and follow Him, He began opening the paths of His ways for me, and my world has never been the same.  It is something truly beautiful!

Proverbs 16:9 says, “The heart of a man plans his way but the Lord established his steps.”  In no way do I deserve this life, but God has always remained faithful, which continues to blow my mind daily.  Looking forward to what He has in store for us lying ahead!! Geri keefe(non-registered)
Thanks for sharing Kim. Having known you for many years and always seeing the sweet person you are and the beautiful woman you've become I'm happy for the blessings the Lord has afforded you!
Okirigi steven(non-registered)
Oh my God , what can I say reading my brothers story, its on that trip I met you brother what Gods plan was it, that story as set my heart to God as it has never been before, love you brother , see you soon
Jeanne Rhoads(non-registered)
Talmadge, this is just amazing and these 4 ladies are beautiful! God has an awesome life ahead for you guys. Love you all!
Ryn Tomlinson(non-registered)
I just BOOHOO'd. That you for allowing God to be glorified in this relationship. I am so thrilled for you and for God!
Keenan Braden
I am so stoked for you all!!!!! God brought you five together and has an amazing plan in store. Buckle up, and enjoy the ride! Love y'all!!!
No comments posted.
Loading...
Subscribe
RSS
Recent Posts
My Story: Jenna My Story: Christine My Story: Hope My Story: Joy My Story: Talmadge My Story: Jada My Story: Kandy My Story: Loriahn My Story: Kimberly My Story: Jada, Part two
Keywords
love your story family my story newborn adoption maternity
Archive
January February March April May June July August September October November December
© Deidre Ruth Photography
User Agreement
Cancel
Continue